Monday night 7:30 pm on Seven…first look teaser premiered the new season of the Aussie franchise with the new coaches and artists.

Do you get the feeling?

Production has claimed a go back to basics with the switch of network locally. While chief production remains unchained.

Seven bought the local rights from Nine Australia and believe that they can deliver a better product.

What does the audience want?

A contestant artist that they can support all the way to the final and beyond the show. Well that is the hope, wish or desire in general.

In reality the expectation falls short.

When will this edition air?

According to sources…The Voice will premiere on the Seven Network after the Olympics. The scheduled closing date is slated as August 8, 2021.

Listen to the studio releases here (when available)

The new network now Channel 7 Australia… for all the additional releases not included here. 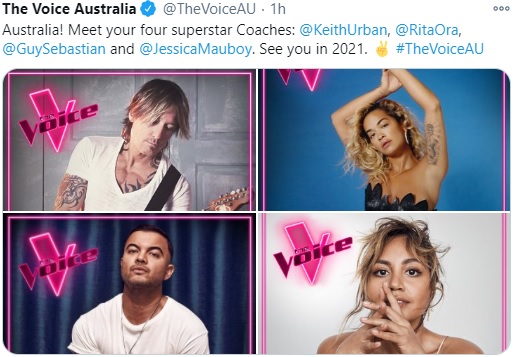 In a major change, three old faces have not resigned with the Channel 9 production team for 2021. Guy Sebastian is the sole surviving coach from last season.

Voice is set to premiere on its new home on the Seven Network in 2021 with four superstar coaches.

One of the most successful formats in the world, the 10th season of The Voice will be hosted by Sonia Kruger and features surprising new elements, plus the strongest ever line-up of artists competing to be crowned the winner.

Grand Finale: The Winner of The Voice Australia 2020

Grand Finale: Johnny Manuel Sings ‘My Heart Will Go On’ | The Voice Australia 2020

Semi Final: Mark Breaks Down On Stage After Brutal Performance | The Voice Australia 2020

Semi Final: Siala Sings ‘Where Is The Love?’ | The Voice Australia 2020